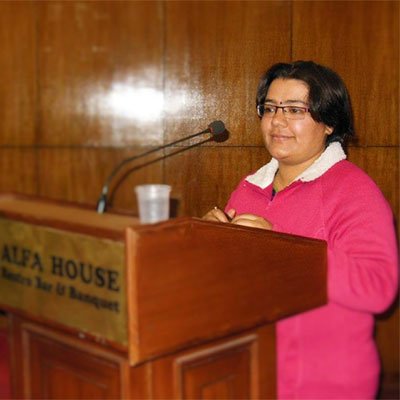 I am a trade union leader.

My first engagement in the trade union was not at all planned. After getting an opportunity to participate in the trade union training representing my union, I started looking at the worker’s issues especially women worker’s issues very keenly. I always tried to analyze my own situation as a workingwomen and try to figure out what would work well for easing the life of workingwomen. In my union, initially I deliberately became the member of the grievance handing committee so that I can directly deal with the issues of workingwomen and seek for the solution through the negotiation with the management on several issues. My commanding voice and knowledge on the issues developed myself as the trade union organizers and educator. I raise and lead several trainings, issues advocacy and campaigns within the sectors and beyond. Whenever any women from any union requested for my help and skill I willingly support them with my knowledge. I frequently visit the different sector unions to interact with the union leaders and women leaders on various women issues.

I am proud, I am leading to raise women’s issues and voice for the decent work in violence free work environment, reproductive right, meaningful participation in the decision making structure and work life balance issues. I feel happy to hear when the working sisters call myself as their leader and it encourages me to work more hard for the women workers in Nepal.

There are several issues of women and workingwomen in Nepal. Every day new forms of problems, harassments, and cases of violence are being reported; so there is great need consolidate our efforts in minimizing these types of threat. The issues of women workers are not being prioritized in the demand list during collective bargaining, for which a preliminary bargaining and negotiation with the trade union leaders is necessary. These kind of irony needs to be demolished for which I will work for creating the consolidation among the women workers in future by organizing more women into the trade unions and creating awareness among the women in trade unions.

Let’s stand together for the fight of decent work for women!!!